Well, this is a world record! From recording to publishing in under a week? WTF??

This delectable slice of that podcast that just won’t die kicks off with a disagreement on sandwiches.
River takes the government skills assessment and we get an insight into the great man – but it’s utter rubbish (the assessment that is).
Dr Norman is…a bit tipsy and Paul Heaton from the Beautiful South is a very nice man.
River REALLY doesn’t like Meghan Merkin. Or Ed Sheeran. Or rich people.
We meet Ada and (Inappropriate) Edna and are welcomed to the Hotel Aquarius.
The reminiscent frenchman tells another tale and there’s chat of Dr Norman’s fixation with one of the victims of the great Pompeii disaster.

Oh, and there’s a world exclusive on the Channel Mirth News that you will NOT want to miss… 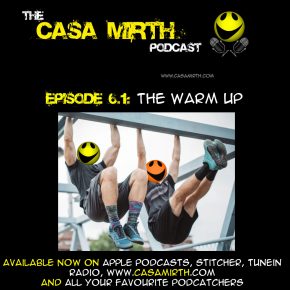 It’s been a while. Ok it’s been a looooong while. But here it is, a light in a world of utter madness, some stupidity to break through the mire, some complete and utter…well you know.
And if you don’t, well good luck.
In this long-overdue slice of Mirth, the boys catch up on what’s been happening – as much as they can remember.
Dr Norman recalls the time he did an open mic standup routine. The Casa Mirth website got hacked and Dr Norman got confused.
There’s a ridiculous discussion on toilet paper (more or less), no Mensa prizes for a chat about invisibility, and a potential avenue for a new career via Only Fans.

Celebrity Brainwave invites an acting legend to show their general knowledge chops, the Channel Mirth News returns and did we mention the Falcon sex hats? 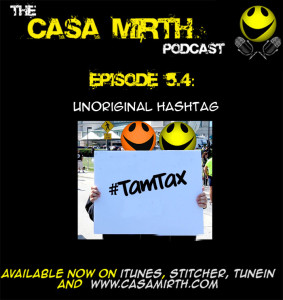 Yes they’re back! (and about as welcome as a second term for Donald Trump).

In this delectable slice of idiocy, the boys have an argument over a facebook joke, decide it’s time for a show-sponsored charitable initiative and discuss unfair taxes. 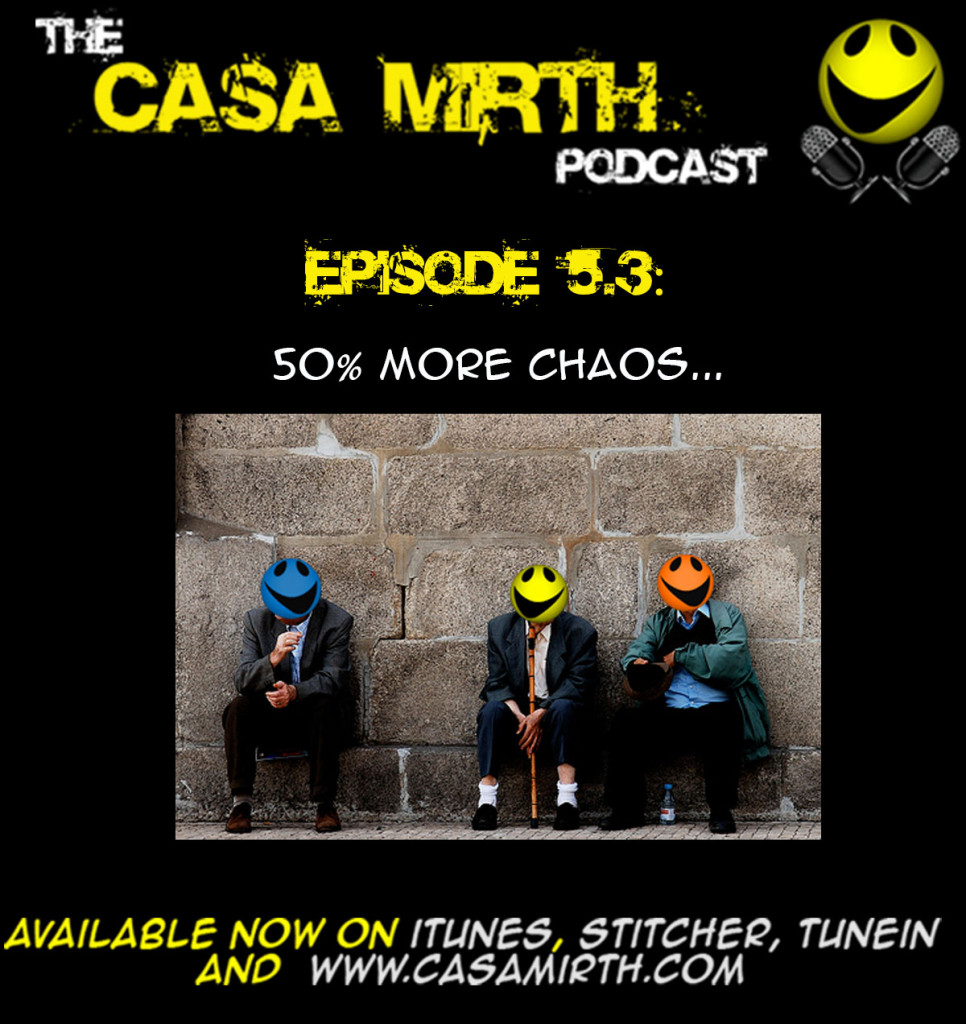 Oh my lord! In this skip back in time (quite literally, this was recorded 3 months ago FFS!), Dr Norman has a speech impediment (not drink related) and has face aids. Some bright spark has the idea for everyone to do accents… and it’s about as ridiculous as you would imagine.

Along with the normal shenanigans, there’s dicks, blasphemy and for some reason, cock jousting.

Poor old Stephen Hawking is dead, and they’re still banging on about his dick. Finally Dr Norman gets distracted by River Zambezi ordering food at the end, so there isn’t really an end bit (not that you’ll mind I’m sure, you know how to find us).

So if you ever thought the hosts were drunk before….well maybe you’ll reconsider after listening to this one.

Oh and did we mention there’s a VERY special guest? (who didn’t know that Bruce Forsyth was dead…) 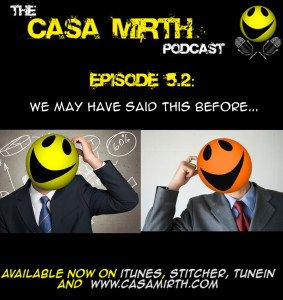 Crumbs you are being spoiled! A new episode in under 3 months – what’s going on??!!
In this new instalment of what no-one is calling “the Tupperware of comedy podcasts” (no I don’t know either), the boys are worried that they may be recording pretty much the same episode as the previous one as they were so drunk they couldn’t remember what happened (and recorded this before S5E1 had been edited).

We have the world’s quickest conversation about vegans. Dr Norman knows surprisingly little about anatomy for a doctor and isn’t losing weight…and we might know why.
River learns about colonics and enemas and the difference between the two and the boys conclude that cancer is bad.

All that, a new episode of Casa Mirth’s Film Club and a truly “interesting” chat about Stephen Hawking and it’s business as usual for the funniest podcast these notes are about. 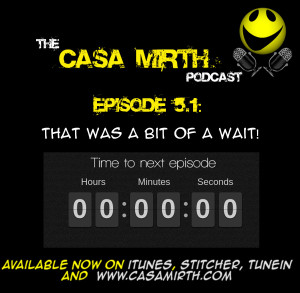 Well that was a bit of a wait! Your forgotten favourite podcast is back – and it’s like it never went away.
In this delectable slice of Mirth:

There’s an argument straight out of the gate, and Dr Norman apologises to one of the artistes who contributed to the Christmas special…

River saw the Human Centipede 3 and has an itchy bum (not related). The boys have had an idea for Christmas…and it’s big!
Dr Norman gets emotional and has questionable experiences with cats, there was an incident after the Christmas special and the boys ask a very provocative question.

All in all, Dr Norman is drunk, River gets a bit angry and it all gets a bit lively (maybe more than usual – for reasons explained on the show). That said, it’s all over before you know it.

So sit back, put your waterproof laughing pants on and enjoy! 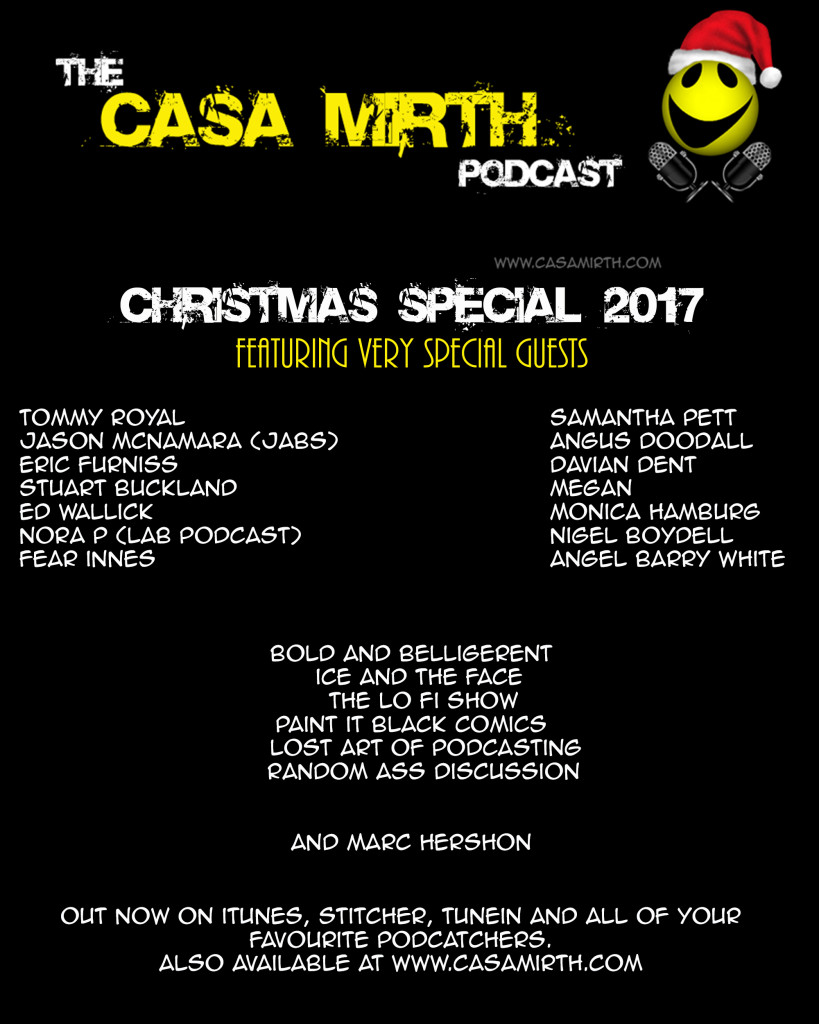 Yes it’s back for one last festive fling of the year. Well we say festive – as festive as a conversation about the nativity, flat earth and wank socks can be…

But there’s more than just inane chit chat (although we know you love it) as this year, Dr Norman Trousers and River Zambezi treat you to the Casa Mirth version of “It’s a Wonderful Life” – featuring a star-studded cast in a (not entirely accurate) remake of the Christmas classic.

We hope you enjoy the show! 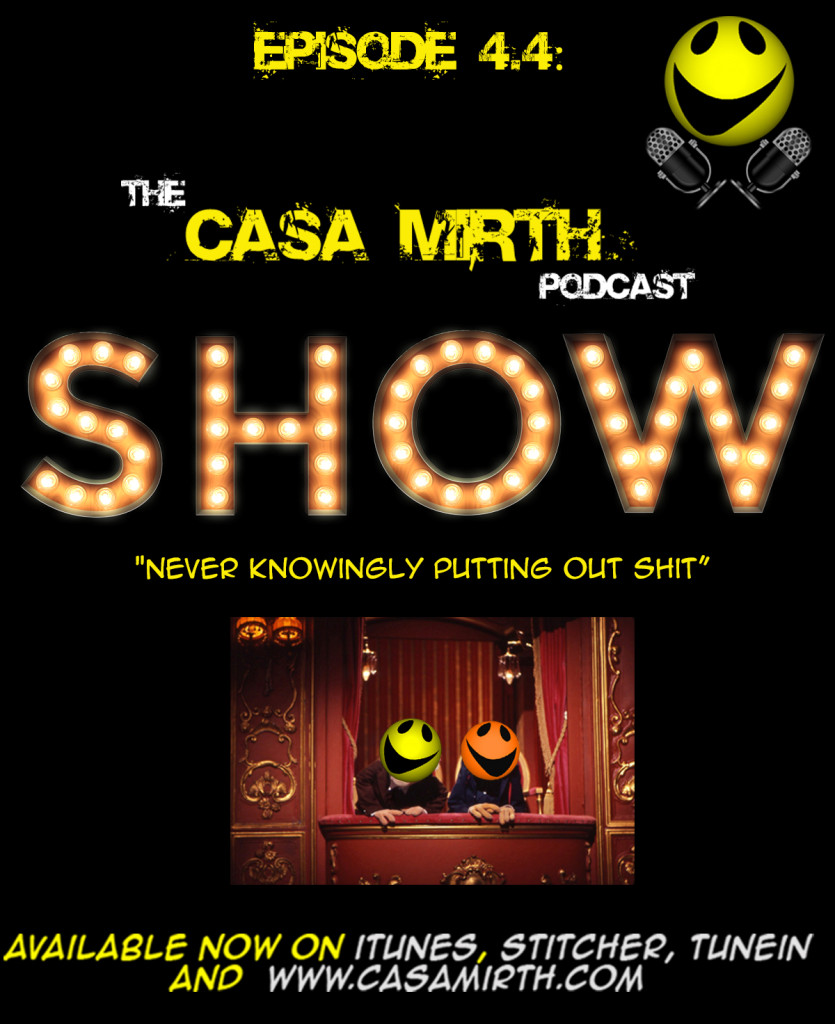 Roll up folks! It’s another episode of that podcast you easily forget you’ve missed so much!

In this delicious slice of Mirth, River Zambezi takes over – and can’t remember the name of the show.
There was so much covered in the first hour it was difficult to keep up with note taking so let’s just say that River and Dr Norman Trousers discussed a lot.
It all gets a bit spiritual at one point, River “doesn’t read the Daily Mail” and shouldn’t be allowed pets.

No sketches but lots of the ridiculously inane yet somehow hilarious chat you’ve grown to love (and love to groan about) makes this a great reminder that the mantra “quality over quantity” is definitely being kept to. 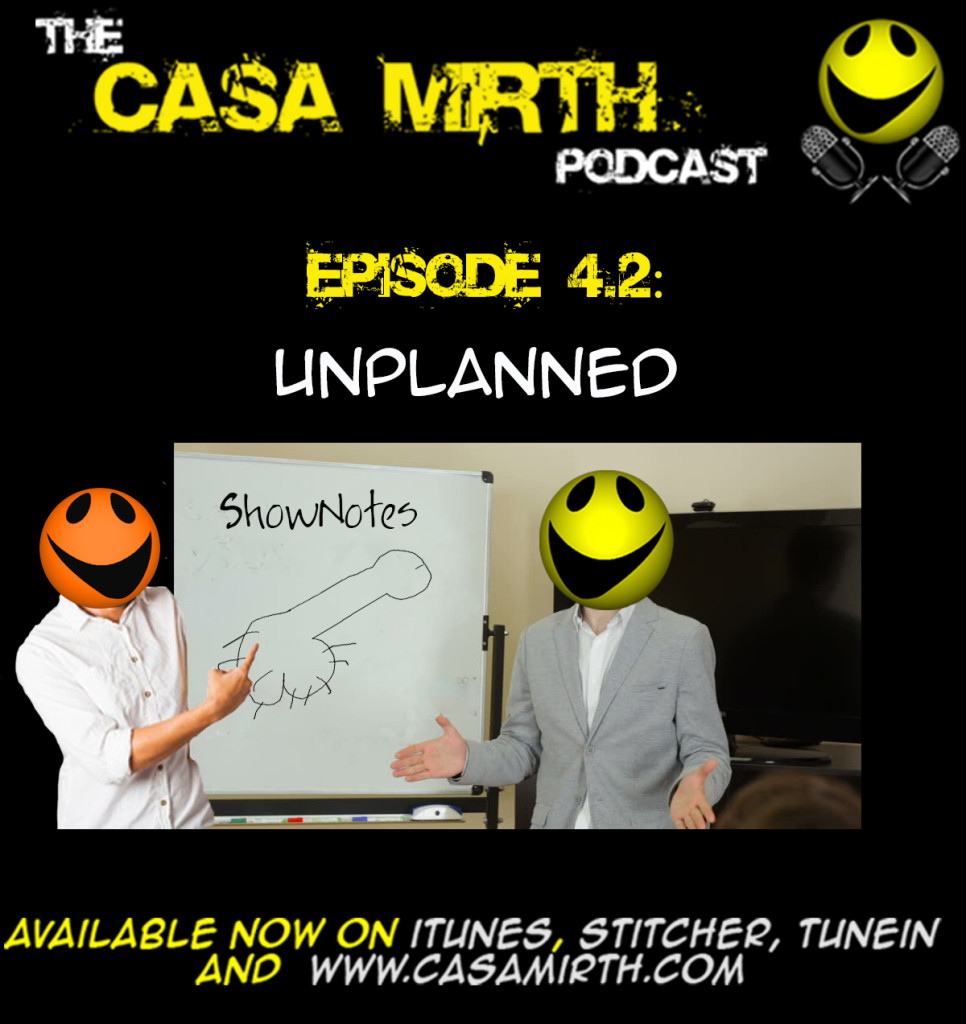 What??!! A second episode in the same month?? What is happening here!?

Yes that’s right – the boys are back in this (appropriately titled) Unplanned episode of your favourite podcast.
Dr Norman Trousers and River Zambezi went to a beer festival …all day. An impromptu recording session ensued, with virtually no planning – and it probably shows.

In this slice of aural carnage, there’s arguments about making tea and mobile phones, talk of fantasy women and recollection of a very deep conversation in the cab on the way home from the beer festival.

Dr Norman can’t remember pretty much anything, there’s an attempt at answering a listener question that goes horribly wrong and the hosts are both entirely unimpressed with the latest charity single doing the rounds.

With no ads, no sketches, and let’s face it – no idea, this all wraps up into a welcome surprise episode from two of the biggest idiots in podcasting. 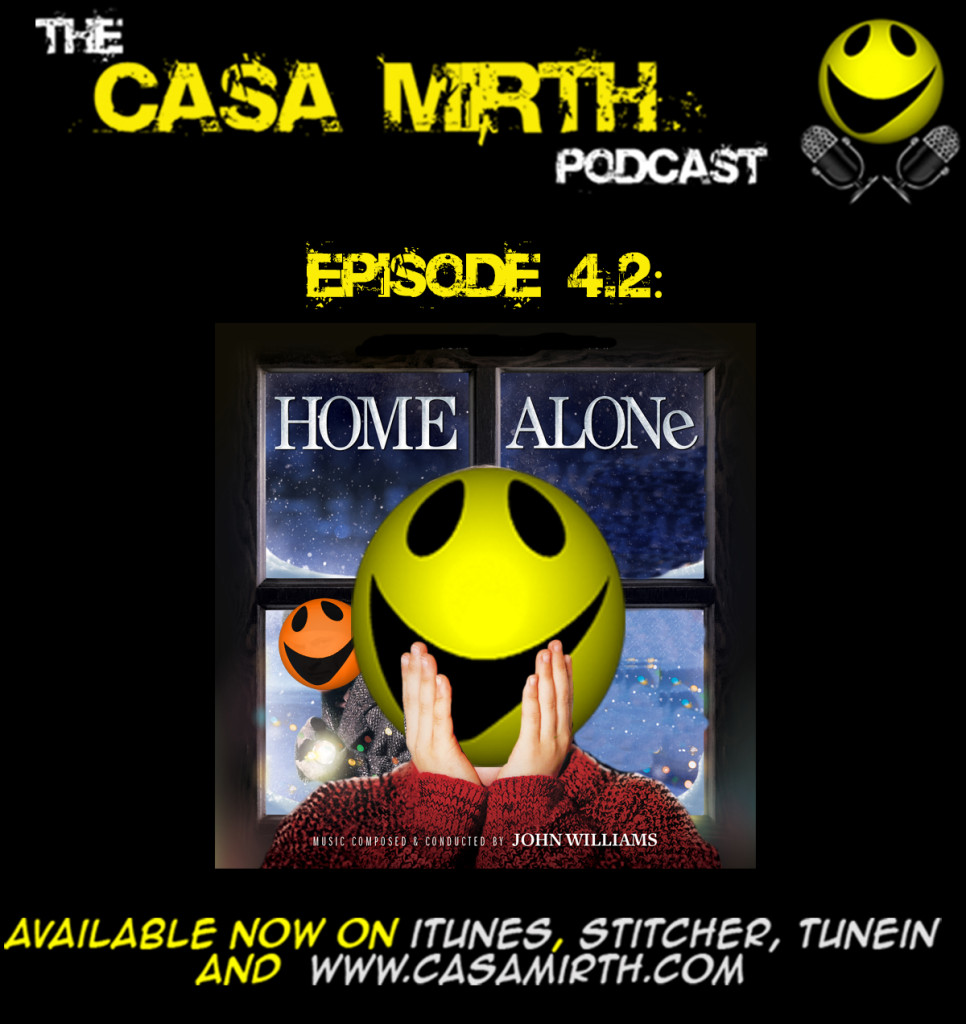 The boys are back and they’ve been drinking in the sun for 6 hours  – so things start off as you would expect and go downhill from there!
In this cataclysmic episode of the podcast that’s like your favourite uncle who never turns up to family gatherings, Dr Norman had a health scare a while back and has recently been home alone.

There’s an unexpected argument about a fart and a brief discussion about vaginal steaming.
Dr Norman dreams of jamming in a music shop and River likes a careless whisper.

Both boys resolve to lose some weight and eventually answer some listener questions. Well – fail to answer one and debate (whilst getting nowhere) a question about the zombie apocalypse.

All this as well as a return from the cinematic madness that is Film Club, the guys at Radio Mirth say hello and we meet a rather interesting vet.

So kick back and enjoy the show!

Yes folks – the proverbial bad penny of podcasts is back with a bang! Apart from not knowing what they’re doing, it’s like they’ve never been away…ok so they never know what they’re doing… This episode can best be described by a phrase that most men wish they could say; “It might be long, but it won’t hurt”. Ok actually it’s more like “It’ll be over before you know it”.

In this funtabulous episode, Dr Norman Trousers attempts a retrospective of 2016 focussing on celebrities who died with little fanfare – which is made harder by the fact that River Zambezi hasn’t heard of any of them.

Dr Norman just wants a “coffee” and can’t do a Russian accent. There’s a brief chat about advertising and the boys go off into their own little world after having an idea for “japes” at Currys (a local electrical retailer).

There’s an attempt to remember children’s tv theme tunes that turns into a discussion that goes as well as you’d expect, and a chat about classic films reveals why Norman won’t go on a cruise.

Also on this episode, Norman’s given up bread and had a dream about a doughnut (that’s donut) that leads to an inevitable question.

Talking TV shows turns into a heated discussion about “romance” (well not exactly – but it turns out River’s an old romantic at heart.)

So sit back, grab a drink and get ready for another slab of mirth and merriment from your favourite idiots.