If you’ve listened to Episode 1, you will have heard Dr Norman Trousers tell a tale of a DVD that would seemingly have come from a parallel universe.

The interview show “From within the Actor’s Head” has an introduction that certainly indicates this.

As Dr Norman Trousers and River Zambezi discuss, as crazy as this idea may seem, we have already seen some supporting evidence : in the 1995 sci-fi adventure series, Sliders.

As the write-up for the first episode tells us:

In a San Francisco basement, physics post-graduate student Quinn Mallory has found a way to create portals to parallel universes. Inviting his physics professor Maximillian Arturo and his computer store colleague Wade Wells for a trip, a series of mishaps ropes in passing singer Rembrandt Brown and takes the Sliders off their planned route. Upon discovering a frozen world and one where Russia rules America, the quartet begins to doubt that they will be able to return to their own world anytime soon…

(for further info on this show, click here: Sliders on IMDB)

Hollywood wouldn’t lie, would it?

No of course it wouldn’t. We all know Sliders was real – that was the “in-joke” about it all.

So it makes it entirely plausible and of course true, that “From within the Actor’s Head” is real. As real as Sliders, which we can now theorise was actually a documentary – a bit like “The Only way is Essex” or “The Real Housewives of Beverley Hills”, just without the massive wankers in it.

Look at this face: 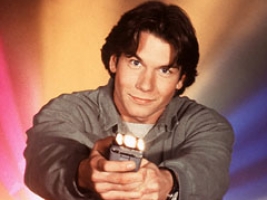 Jerry O’Connell – this is NOT the face of a liar…

See it must be true – Jerry O’Connell is a stand up guy. To say that parallel universes do not exist, is to call him a liar – and that would be just plain mean.