Booze and News; Ringtones and Warzones

Our team first met during the first war in Iraq, where, when working for different news agencies but stationed in the same media camp, they were sat in the same bar.

Hearing his satellite phone ring, Bud reached into his backpack to get it. It wasn’t ringing.

Yes – coincidentally Jet also had “I never promised you a rose garden” by Lynne Anderson as his ringtone. Laughing at this together, the two bonded over several crates of cheap beer, and have been best friends ever since.

Thick as sh!t? Or just in the thick of it?

The high of covering a news story in a warzone is comparable to winning the jackpot on a fruit machine with your last 50p, or hitting a treble figure level on Candy Crush. Together Jet and Bud have covered stories as far afield as Iraq, Afghanistan, Somalia, Beirut and Hounslow. 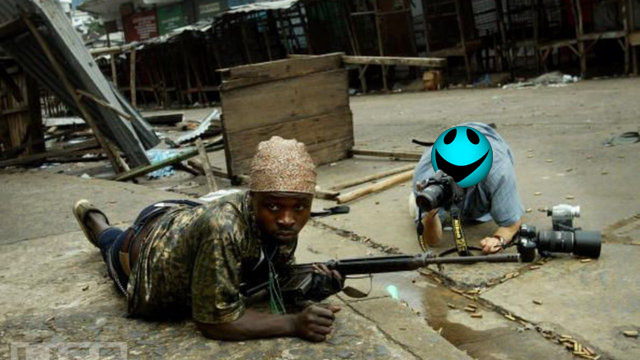 Jet gets up close and personal with a guerlla sniper in Somalia, before teatime.

Jet started his journalistic career as a photographer, firstly as an independent for the Clacton Gazette, but quickly working his way up through the BBC and Reuters following some critically acclaimed work in both Bethnal Green and Somalia

Bud in action – these guys were about to shoot dinner!

Bud’s big break came after several years on various local newspapers, both in the agony aunt columns and classified ads sections. After uncovering a Watergate-esque scandal in the Biddestone local council elections, Bud’s rise amongst the ranks was all but assured.  Also pretty nifty with a polaroid, Bud’s taste for adventure was secured during an assignment in Iraq following a US patrol under fire, followed by an undercover piece written about a pikey camp in Sussex.